The idea for this project came to me in the middle of the night and is the reason why I now keep a notebook by my bedside! I couldn't stop thinking about it and ended up writing it down so I wouldn't have it floating in my head (or floating OUT of my head!)  In fact, my husband had to threaten to TAKE the notebook away from me because the ideas wouldn't stop comming out of my head! The pics are almost in the form of a tutorial, but , I tend to not work from patterns a lot, so, help yourself to copying it, but be prepared......no measurements! 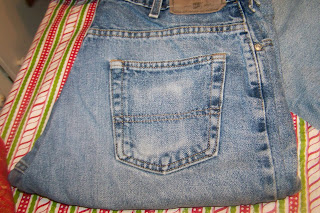 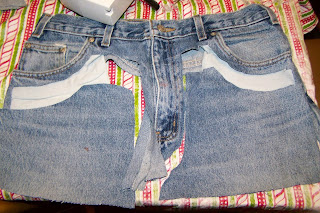 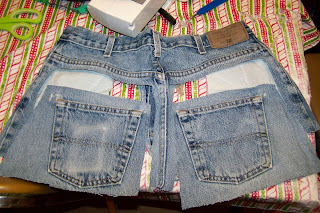 And these...(maybe these will be inside pockets when I'm done!) 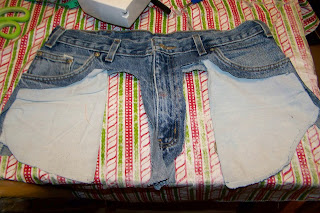 I think I'll leave the pocket liners.....yeah, i will! 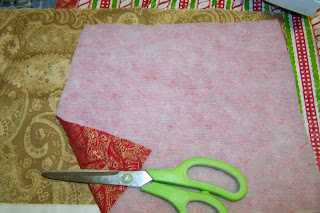 These two paisley fabrics that I got from a resale shop will work! 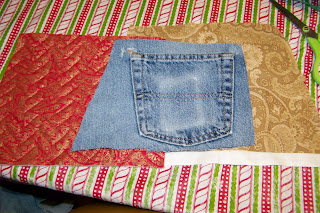 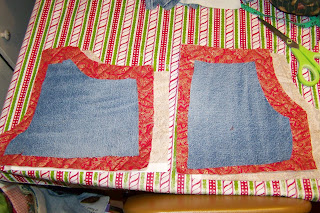 One from the pre-quilted paisley for the outside and one of the cotton paisley(cut facing away) for the inside of the purse! 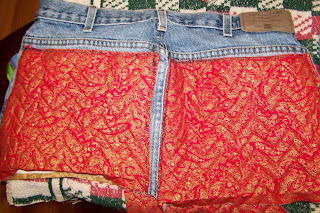 I'll fold under the edges and iron them....then I'll attatch them with a zig-zag stitch! 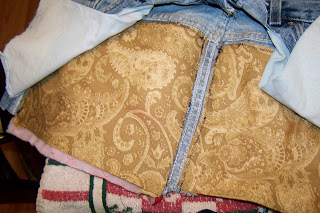 Not until I fold and iron the inner fabric so I can pin and sew them at the same time though! 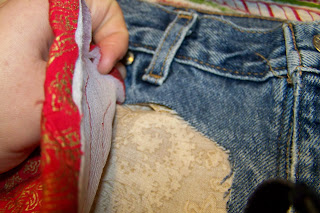 I will lay them over and under the jean and sew along the edges. 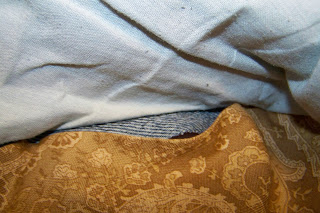 Sewing around the front pocket insert is tricky, I'll have to sew the inside and outside seperate here so I dont sew through the pocket! 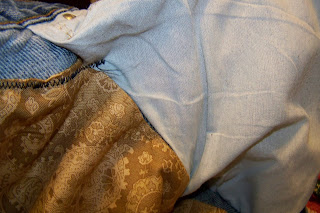 Whew, that was tricky! 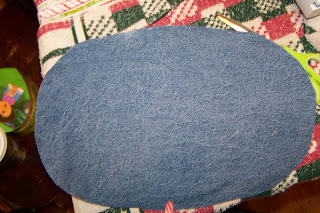 I could just sew the bottom together and then sew off little triangles at the edges to make the bottom, but the CIRCLE is what was in my head last night, so thats what I'm gonna do! 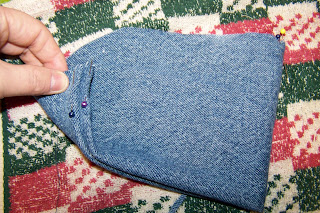 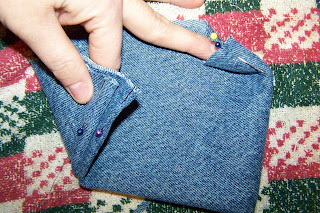 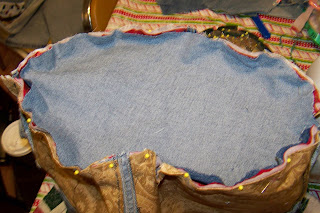 Now I'll attatch and sew the bottom. (wish I'd had my serger out here, then I could have finished the edges nicer!) 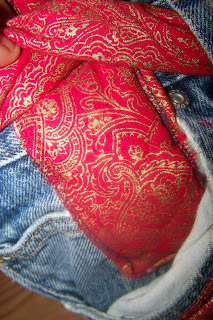 I kinda forgot to take better pics of the part where I sewed on the straps and belt, but here are some close-ups!  I just cut long rectangles, sewed, and inverted them.  Then I attatched them inside the pockets in the front and just under where the belt would cover in the back. 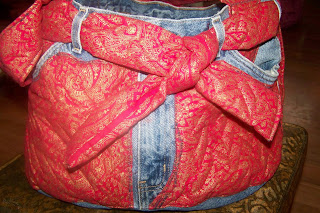 I did the same for the belt, but I didn't sew it down, I just laced it through the loops and knotted it. 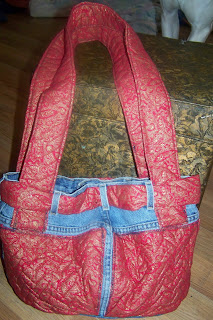 Here is the back end of my gigantic purse. 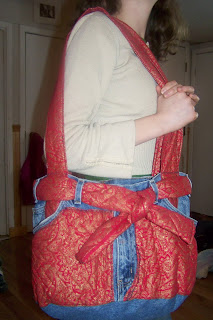 And here is the front! (modeled by my oldest daughter...which makes it look even bigger!)

I would LOVE to see your version, so comment with a link to yours!

Posted by Volleysoft at 9:36 AM

This is so fun--I love it! I'll be featuring this tomorrow! Please stop by and grab a button! ;)

Wow, this is awesome! So much cooler than a lot of jean purses out there!

Glad y'all like it! I'll be sure to grab your button Tammy!

It's fabulous! All the better for not having any measurements too - yay!!! I'll add your button to my sidebar - thanks for sharing x

*ROUGH Translation: A super bag. I have so many old Jeans. I have white ones I will sew it with. Thanks and greetings from Germany.

I LOVE IT! I have been strip cutting my husbands old jeans to make a braided rug...this uses all the pieces I have left over!!! I'm so excited. Thanks for this idea.

glad you like it! post a link with pics of it when you're done...post pics of the braided rug too!

I've said it before and I'll say it again, I wanna see y'all's versions of this purse! Post some links so we can see them!

ydnew: I never thought of this as a dog carrier....how sweet!

Just a note for people who want to post pics of their creations: If you upload your pictures to photobucket, you can post a link for people to look at in the comments section.

Awesome purse! I wanted a smaller one, so I went to the thrift store and bought a pair of child's jeans for $2 and am using that. The front pockets were quite worn - I didn't check that before I bought them, so I'm replacing the pockets with the liner material. Also, I think I'll make the purse interior one piece instead of backing the cut-outs.

I make Bags from old jeans and everyone comments on them. All I do is cut the jeans off just above the crutch then sew the bottom up, I use the legs to make the handles, nice wide ones, then line the bag with any access material and make an inside pocket. You can embellish the outside if you like. I like to make like a belt thing. I sew the handles on then you really need to hand sew the lining in because of the thickness.
I just pick up old jeans from Op shops give them a good wash then off I go. This type of bad is good as a nappy bag also.

I love making them that way too, this one just came to me as something different and I got super excited so I HAD to make it...lol

I love this bag. I have lots of old jeans to use up and this give me great ideas to use them. Thanks for sharing

I SEW love my LINKY followers!!!

Buy an iPod, save 15% on Select Accessories at Target.com

Check out where my tutorials are!

Average Joe on the Raw!

I SEW love these sites!